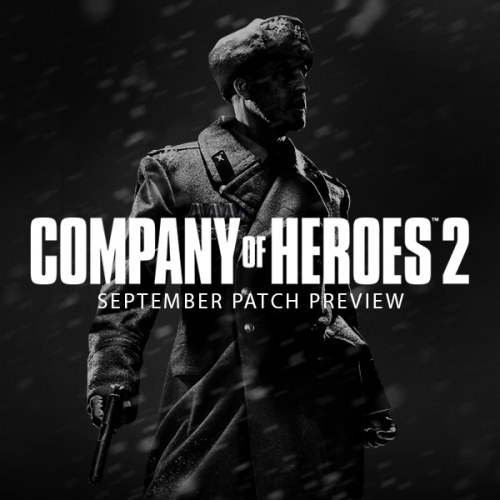 This will likely be the last mod preview for this patch. The mod preview feedback has been useful, and we feel the update is in a Good Spot™. There will be some minor adjustments prior to the official release.

We will be monitoring some of the more nuanced changes in this patch post-release. We feel certain items will be easier to assess once the update has been live, and more players are testing the changes. Problem items will be addressed in a follow-up patch.

We are planning to release the update in approximately two weeks time.

To encourage T2 strategies and reduce the power of skiping tiers, we are moving the manpower discout for Ostheer tech to the Leichte Mechanize Kompanie.

The Tiger is having its AOE reduced on the outer edges to reduce it's killing power and to compensate for the tank's high accuracy against infantry.

We are reducing the cost of this upgrade to better reflect its current performance and trade-offs with the Panzergrenadier StG 44.

The StuG E is being moved into tech like other call-in vehicles. We have reduced the amount of CPs to compensate to encourage teching.

OKW is having some of its manpower changes reverted. The previous changes impacted their early game too much with the price increase on Volksgrenadiers.

We have adjusted the cost of the Schwerer Panzer HQ to allow Obersoldaten to arrive earlier and give the unit more time to gain veterancy.

The Raketenwerfer is having its price increased slightly to better reflect its new performance. Population has been adjusted for the additional soldier to match other anti-tank guns and reduce the upkeep on OKW.

We are reducing the smoke cost on the 251 Flak Half-Track to better reflect how integral this ability is for the unit's survival.

The King Tiger is having it's fuel cost reduced to better reflect it's performance and trade-offs when compared to other heavy tanks.

Fallschirmjager are having their second set of FG-42s locked behing the Panzer HQ to reduce the unit's impact when it first arrives, while retaining a relative timing with their pre-patch changes in terms of firepower.

To better reflect their performance and the changes to OKW's starting manpower, we are reducing the unit's manpower and upgrade cost slightly.

The Hetzer is having its veterancy requirements further reduced to reflect it's main target being infantry. With the changes to the Schwerer's cost, it has been locked behind Panzer Authorization.

Previously, Assault Artillery was too random and the shells took too long to come down. The new changes should force units in the center of the ability to move, or risk being hit.

The recent changes in aim-time had the effect of speeding up the sniper's rate of fire. His rate of fire is being slowed to be slightly behind the Ostheer's Sniper to reflect the smaller squads he fires on, and his ability to harm light vehicles when supported.

We have slightly reduced the scatter of the Comet to improve its anti-infantry firepower at range.

Due to its extrmely high health and decent armor, we are increasing the Churchill's population and fuel cost to better reflect its performance.

The previous changes were too harsh on this upgrade. We are toning back some of the cost to better reflect its power.

The cost of flares is being matched to those used by units such as Panzerfusiliers to incentivise its use.

We are slightly toning back the nerf to Whie Phosphorous from the M21 to have more impact on units that remain within the smoke.

To allow players to purchase this unit when they have teched up to Major, we are reducing the CP cost. Additional CP changes will take effect when the patch hits live.

We are toning back some of the Pershing's AOE which previously allowed it to destroy most infantry squads in two hits. In return, the cost of HVAP is being reduced to give the Pershing an edge against vehicles.

We are slightly increasing the price of T2 to reduce the rush into T70 and stronger Conscript builds.

Due to popular demand, we are giving Assault Guards Thompson SMGs. This should increase the unit's firepower and better reflect the cost and timing of the Half-Track Assault Group.

With its high armor, we felt the IS-2 should have reduced killing power against infantry while remaining relatively consistent in terms of accuracy.