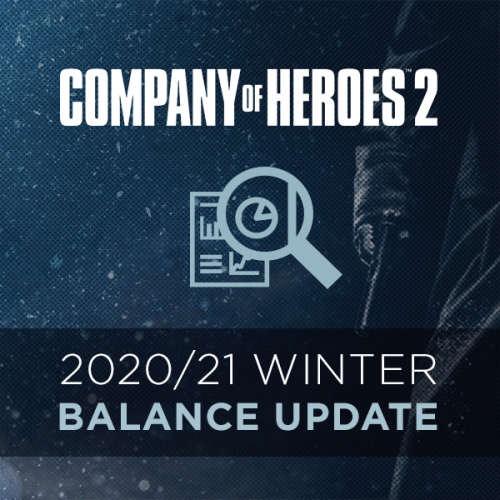 Latest version of the mod can be found here.

While double anti-tank guns are strong in smaller game modes, we do not want to impact their offensive performance or population. Instead, we want to focus counterplay by offering players additional options to break through an AT wall and make over-extended AT guns easier to punish.

To encourage further the usage of smoke against defensive positions, mortars are being made more responsive and are gaining an additional smoke shell per barrage. Their wind down times are also being reduced to speed up how quickly a mortar can saturate a target area with smoke shells. Scatter bonuses at veterancy 3 have also been removed from smoke barrages to maintain decent area coverage.

These units will now have their pintles automatically fire at infantry when in Hold-Fire mode. Both units excel at attack-ground are best left on hold-fire so players can direct their shots, but their machine guns would have limited opportunity to engage without changes.

Given how USF is given a free officer as part of their teching structure, we are giving players an option to call-off their officers to avoid taking up population. This is primarily for the late game where a player back-techs but does not want to be burdened by a fresh officer squad.

Given the weaker stats of the USF mortar in terms of its AOE, the unit is receiving a slight price reduction to better reflect its performance.

The build time of the M7 Mine is being decreased to make these cheap mines easier to plant.

With the lethality decrease to the Pack Howitzer, the unit is having its 6th man returned to help with its limited survivability - particularly against late game rocket artillery.

To give the Captain some anti-sniper power, the machine guns on the M15 are gaining bonuses against snipers. The AA mode for the M15 is also being toned down as the M15 has multiple guns dedicated to killing aircraft while other AA units only have one.

Royal Engineers are being moved to the HQ to encourage different builds from the British, help provide map control over the more expensive Infantry Section, and provide a cheaper supporting unit. A number of their abilities and construction options are being pushed back to avoid having a significant impact in the early game.

Given the changes to Royal Engineers and the timing of most healing options for other factions, Medics are being moved into the Platoon Command Post.

The Universal Carrier is receiving a slight nerf by adding a fuel cost to the unit. Its effectiveness in the early game warrants a slight delay to British teching.

The Raketenwerfer is having its target size increased to match other anti-tank guns. This should have no impact when the gun is crewed, but will make abandoned Raketenwerfers easier to destroy.

Le.IG 18
In line with the mortar smoke changes, the Le.IG is having its reload reduced on its smoke barrage.

The Luchs is being made into a proper detection vehicle to reinforce its role as an infantry hunter. Its penalties against heavy cover and garrisons are also being reduced to make the Luchs more effective at attacking infantry in defensive positions.

The Hetzer is having its initial target size increased to make it easier to drive off in the mid-game thanks to its new timing. Previously, it was too difficult to hit for the amount of armour and health it had.

Changes to Ostheer teching has been reverted due to how they impact strategies that do not rely on call-ins. Further adjustments will be made to focus on the commander infantry call-ins rather than the tech.

To delay Osttruppen without impacting other strategies, we are moving them to the Tier 1 with the changes to tech being reverted. This will put the deployment time of Osttruppen on-par with Grenadiers

We are merging Molotovs and AT grenade into one package. This will make both grenade abilities cheaper than they once were seperately.

Given how cost effective Tripwire Flare mines thanks to their ability to inflict a model loss, provide vision, and are readily available on Conscripts and Combat Engineers, their cost is being increased to better reflect their performance.

The sandbag changes that were applied to the other factions will now apply to Conscripts in the early game to encourage more mobility and positioning. Conscripts will build items faster once they have veterancy as they are reliant on their sandbags during the mid-game period.

The AA chance for the M5 are still being fine-tuned to be more reliable, without the ability to instant destroy planes.

The Mobilize Reserves changes for Conscripts and the Mechanized Armor Kampenya are being reverted. While the upgrade could have stood on its own, it did not give an incentive for players to rush towards their final tier. The bonus to Conscripts is also being removed.

The majority of changes to ram are being reverted. The main issues are linked to certain off-map abilities, though, we are replacing the complete stun ram provided to give vehicles hit by this ability some ability to maneuver out of off-maps.